Queen Elizabeth has revealed her worst kept secret regarding who will run the final leg and light the Olympic flame on July 26th in London. Everybody thought it would be blistered rower, Sir Steven Redgrave, who won gold medals at 5 Olympics, but a surprise announcement has sent Sir Steve rowing back up the Thames.

The Olympic flame will be lit by that aristocratic, outstanding, intrepid adventurer, Erskine Quint Esq. (Nearly Sir). He has been chosen because just like Lady Gaga, Madonna, Joan Collins and every other beauty (or ex) that crosses Erskine's path, they all fall head over hills in love with this mercurial, insatiable stud and can never say no; even Queen Elizabeth!

Erskine Quint is related to the Queen, so she has no chance. But still she is infatuated at the emergence of this "True Brit", blue-blooded, mega-hero conquering the world's most evil evils and the "madness" that has put him far beyond OO7 and other pretenders including George Lazenby (who?).

Erskine will make a stunning entrance riding a pure Arabian white stallion sponsored by Mohamed Al-Fayed and available at Harrods (dodgy that one). Snatch the torch from Sir Steve's blistered hands, mount the stairs and with the whole world watching, God and all, light the fire!

All female athletes are guaranteed to faint (some males too, including those ducky divers) at the breathtaking spectacle. Erskine will then take off in a Virgin balloon, sponsored by you know who and disappear into the fantasy of the author of this madness because he has a sequel to star in! 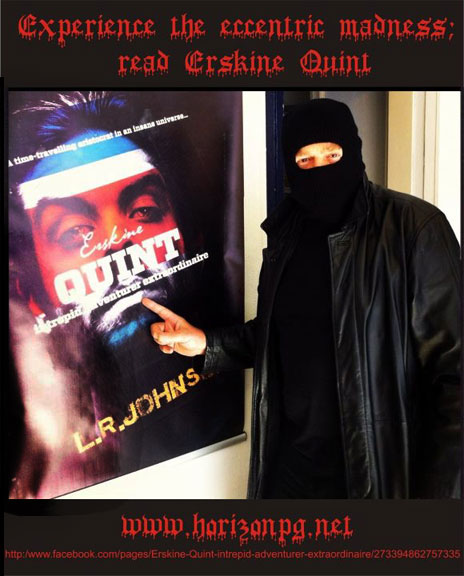 "Erskine Quint intrepid adventurer extraordinaire" available over the Amazon (jungle - US and UK) and www.horizonpg.net!

Buy it and you'll never be the same again; ask the Devil!