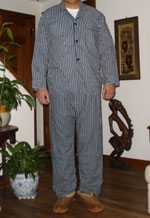 John Peurach has published 67 items on The Spoof.

Profile: At present, a relatively busy background actor, specializing in distinguished middle-age back-of-the-head poses and/or nonchalant, yet deceptively, rapid foreground crosses. Previously, I was the long-time Comedy Researcher/Eligibility Coordinator/Runner, etc. at a great metropolitan TV producton company. And, prior to that, in a far off place a long, long time ago (actually New Jersey, circa late-70s/early 80s, but who's counting?) I was the not-exactly-buttoned-down Warehouse Manager for a reasonably well run manufacturing company that specalized in bakery equipment, and (at the time) assorted high-tech gear for the CIA, which, due to the nature of certain so called "necessities", I'm still not at liberty to publicly discuss.

Unless, of course, my Uncle Lou suddenly resurfaces, in an otherwise talkative mood (hopefully in possession of at least one of his original thumbs) and I, for the most part, have finished viewing any TiVo'd episodes of "Showbiz India". In which case, it's game on and back to all the usual sort of duck & cover swordfish.

Other than that, the only real highlight has been the summer I spent as a way in over my head 7-year-old Advance Man for Richard Nixon during his 1960 Presidential campaign, and the fact that I once spoke to Cary Grant via his front door intercom.

In other words, I haven't yet finished "Moby Dick", and remain more or less convinced that none of this is ever going to wind up being on the final.

John Peurach hasn't written anything in a while, so his/her news feed is seriously out of date!