About The Spoof - Funny Satire and Parody

A brief history of The Spoof, its ups and downs, strikes and gutters, peaks and troughs...

When we first created this page, we didn't imagine there'd be so much to tell. Since there is, we'll start with recent history and then ramble on as usual.

How The Spoof started

Like lots of companies, The Spoof originally had another name. Back in 1997, a website was created called "There's No Place Like Home" and was created by Paul Lowton. It was a fairly useless online magazine because it never got beyond issue #1. But, in the summer of 1998, it all changed.

Laughsend was the follow-up website to "There's No Place Like Home" - it was fresher, it was dynamic (back then these buzz-words didn't even exist!), and it let anyone write the stories. Mark, brother of Paul, joined at this point and the team went from strength to strength. 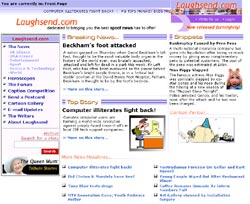 Laughsend, as it was back then

It was the legacy of allowing the readers to write the stories, that Laughsend handed down to The Spoof; the idea of letting multi-talented writers and comedy writers get themselves on the web.

And Then Laughsend Died.

The Spoof was created in 2001 and started slowly, with nearly all contributions coming from Paul. With Mark on board the editorial team strengthened mightily and, thanks to timing and good luck, the site really took off gaining the respect and attention of many tens of excellent spoof and satire writers.

...and it continues to do well! 16 years on the site is filled with vibrant, wonderful writing and superb stories to make you laugh, cry and...so on.

^ Back to Top
Send to a friend

Tell your friends about The Spoof!